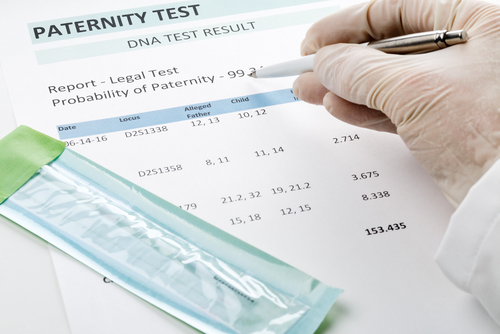 The process to establish paternity can be either voluntary or involuntary. If both parents agree that the father is the child’s biological father, then the process is voluntary and usually takes place right at the hospital when the baby is born. Both parents sign a Voluntary Acknowledgment of Paternity form. A hospital representative will assist/witness the filling out of the forms, which are then sent to the Division of Vital Records. If for some reason the forms are not filled out at the hospital, they can be obtained and filled out at the Department of Health’s Division of Vital Records and the Office of Child Support Services.

Once the forms have been filled out and properly filed, the father is declared the child’s legal father and his name will be put on the birth certificate.

Unfortunately, not all situations are this simple. There are many situations where there is a disagreement between the mother and alleged father about paternity. In fact, according to data from the Office of Child Support Services, more than half of the babies born in the state of Rhode Island do not initially have the father’s name entered on the birth certificate. In these cases, the paternity process is deemed involuntary and takes place through the family court system.

In an involuntary case, the person seeking to establish paternity will file a Complaint for Paternity petition with the court. This person is referred to as the petitioner. The petitioner can be:

If the father is not willing to declare paternity and the mother wishes to have paternity established, she can either file the petition herself with the court or she also has the option of having the Office of Child Support Services file the Complaint for Paternity on her behalf. The mother is required to sign the complaint and sign an affidavit that includes supporting facts. At this point, the alleged father has the option of admitting paternity or requesting a DNA test. The state initially pays the for testing, however, if the test proves that he is the child’s biological father, he is required to reimburse the state for the cost of the test.

If the DNA tests proves paternity, the father is legally ordered to acknowledge that result. If the father refuses to respond to the results, the court will issue the paternity order based on the father’s failure to respond. This also allows the court to issue a child support order requiring the father to pay the mother child support payments.

There are also many cases where the father is being denied paternity by the mother and his parental rights to the child. In these cases, the father would file the Complaint for Paternity petition with the court. If the mother disputes paternity, the court will order a DNA test to make the determination. If the DNA shows that the petitioner is the father, he will be added to the child’s birth certificate. Once paternity is legally established by the court, the father is then able to pursue his parental rights, including custody, visitation, and child support.

Why Is It Important for the Child to Establish Paternity?

While it is important to both parents to establish paternity, the importance to the child is the most critical. Study after study shows how crucial it is to a child’s emotional and physical well-being for both parents to be an active participant in their life. It is also important for the child to know the medical history of both parents’ families.

There are also the financial considerations that the child is entitled to under the law. The law says that both parents are legally responsible to provide both financial support and medical care for their minor child. Proving paternity ensures that the necessary legal orders are put in place. Unless paternity is legally established, a child does not legally have a right to any inheritance from his or her biological father or family that they would legally have the right to if paternity was established. A child may also be entitled to any Social Security or Veterans Administration benefits through their biological father.

Paternity isn’t the only legal issue that parents may have to deal with when it comes to establishing parental rights. A new law recently signed into law by the governor will finally give gay and unmarried couples, as well as those couples who use assisted reproduction (i.e. surrogacy, sperm donation) to create their family an easier legal process to obtain equal parental rights.

Many parental rights advocates say the passage of the Rhode Island Uniform Parentage Act (RIUPA) was long overdue, providing the first update to the state’s parentage laws in four decades. The law replaces the state’s Uniform Law on Paternity and now allows families to become families without the need of intervention from the court. Instead, they only have to establish parentage by filling out and filing a Voluntary Acknowledgement of Parentage when the baby is born. Parents will no longer have to go through a second-parent adoption in order for the non-birth parent to have legal parental rights. The law denies all rights to sperm donors.

To learn more, call Kirshenbaum Law Associates at 401-467-5300 for a confidential consultation.