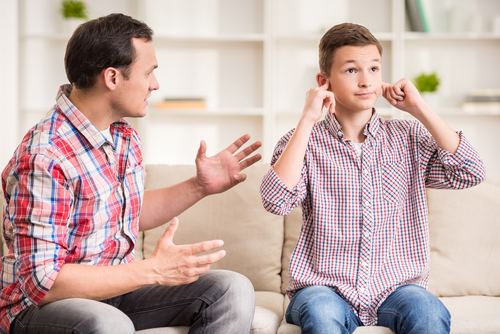 One of the most challenging things couples have to deal with following a divorce is to co-parent together in a cooperative manner. This can be made particularly difficult if the divorce was an acrimonious one. While it is not uncommon for one or both ex-spouses to have feelings of anger or resentment for the other, it is critical for the emotional health of children to not allow those feelings to seep into interactions with your child.

Unfortunately, not all parents realize that children thrive better when they have a healthy and lasting relationship with both parents. They do all they can to interfere with the bond that their child has with the other parent. This is known as “parental alienation syndrome (PAS)” and when it occurs it can have a serious impact on the emotional and mental well-being of the child. If you suspect your ex is trying to interfere with the relationship you have with your child, you need to know the signs and what legal steps you should take if you suspect it is happening in your family.

Parental alienation syndrome was first recognized in the 1980s by forensic psychiatrist Richard Gardner. He described PAS as a “disorder that arises primarily in the context of child custody disputes. Its primary manifestation is the child’s campaign of denigration against a parent, a campaign that has no justification. It is caused by a combination of a programming (brainwashing) parent’s indoctrinations and the child’s own contributions to the vilification of the targeted parent.”

While the divorce process is occurring and after it is complete, it is normal for emotions to be raw and the parents must now find a new way to communicate with each other and effectively co-parent. Seeing each other during drop-offs, pick-ups, occasions where both parents are present (i.e. school events), and making the new parenting time schedules work may take time, effort, and patience, and there are bound to be a few blips in the beginning. This is different than PAS, which is a deliberate interference of the child’s relationship with the other parent. Signs that this is occurring include:

Another sign of possible PAS is if the child exhibits sudden or extreme burst of anger. While it is normal for children to express or show some feelings of anger following their parents’ divorce, these incidents of PAS go far beyond these normal emotions.

If you suspect you and your child are victims of parental alienation syndrome by your ex, there are steps you can take to protect your child and protect your parental rights. First, remember that despite how angry you may be at what your ex-spouse is doing, do not attempt to seek revenge or retaliate against them. By doing so, this could only hurt you legally and, just as if not more important, will only harm your child even more. Instead, contact a child custody attorney who has experience dealing with cases of parental alienation.

If the alienating parent has been interfering with your parenting time, your attorney can file the appropriate actions with the family court overseeing your case for enforcement of your custody order. If the case is serious enough, your attorney may even file for a change in custody.

You should also make arrangements for your child to see a therapist in order to help the child deal with the emotions and issues the PAS has caused. The therapist can also prepare a report that can be presented to the family court judge overseeing your case, as well as serve as an expert witness if a trial becomes necessary.

If you suspect parental alienation syndrome is occurring with your child, or having any other child custody issues, call Kirshenbaum Law Associates at 401-467-5300 for a confidential consultation with a skilled Rhode Island family attorney.